You are in my frame 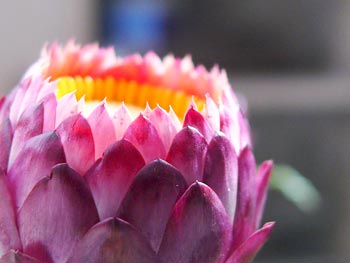 Apart from looking like a furnace, this looks like a defensive formation by soldiers. Each petal is like a shield that is protecting what is at the center.

Have you ever noticed that no matter which whisky they are drinking, the mouth of the bottle is always the old fashioned one

The light that falls through the windows on the bottle looks like braille.