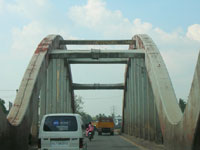 During my visit to Cochin I took a lot of photographs and most of them were taken while inside a car running between 75-100kmph. Thankfully the light was good so I managed to get images without blurs. I am fascinated with the shape of this bridge and the blue tint you see at the top is the tinted windscreen of the car.

I held on to this picture for quite a while, I wanted to post it but was not sure if I should or not because all you see in this image is the blur of Manu playing in our kitchen. For some reason, I like this image a lot but am not sure if anyone else will appreciate it or not. 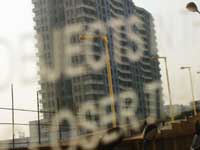 This is the reflection the building under construction next to ours in the rear view mirrir of a scooter. 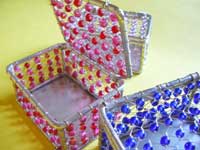 Mira bought these small jewelry boxes from District Centre in Janak Puri, New Delhi. We bought these and a lamp that I will post sometime. Now we think we should have picked up more stuff from that shop because it happens quite often that we need a gift for someone and there is not enough time to go and buy something decent, more stuff from there definitely would have been quite handy. 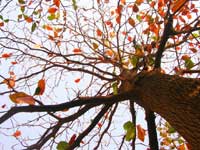 Last Sunday when I went to our society's parking lot, I saw this tree. It is amazing how the colours of the leaves are so vibrant even when they are dying. This is what I call being in the right place at the right time because a few days later, this tree would have no trees and any other time of the day, I won't get such good lighting. 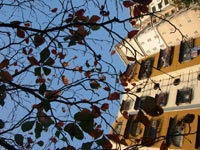 Not the best of the images I took at that moment (a better one will come tommorow), I still liked it because of the way the two buildings seem to merge. The one at the bottom in Greenfield and the one on the top is RNA Heights. 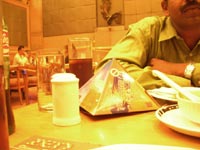 This picture is prompted by the picture in today's Hindustan Times that showed the encounter specialist sub inspector Daya Nayak of Mumbai Police in a coffee shop in Andheri. Is this really Daya Nayak. Well he is not. He is Ritesh Singh and works for WHO in Delhi and is a good friend of mine, he just looks like Daya Nayak in this picture.

While buying lamps for Diwali in Delhi, I saw these small mask kind idols of Durga and Ganesh. I posted the other one on the first of this month and this one was lying in my possibles folder for some time. I decided to post it today for a break from the kind of pictures I have been posting recently.

I was taking pictures of tea bags in my office pantry for one of the project I am working on. After taking some regular shots showing just the teabags, I decided to experiment a little. Although it is not suitable for the project but I quite like this image. 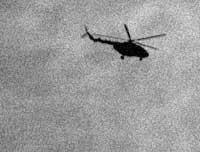 Well I'm back to flying objects. I have posted quite a few picture of choppers and while posting this one I thought editing it more than usual. I feel the black and white and the noise gives it a very surreal effect. If tis was a movie, it would be like a chopper flying in ultra slowmotion and all you could hear in the sound of it's blades. This is my interpretation, what is yours. 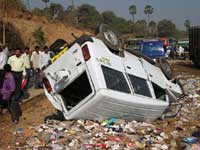 One of my picture has been published in Midday. Taken on my way to work, I sent it to Midday and it was published the next day. I was not even aware of it till one of my colleague told me that my image has been published. The spot where Sumo toppled makes it look like the owner had enough of it and just dumped it. 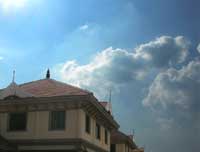 This is Kochi international airport. I didn't knew it was international till I went there a couple of days ago. It is a small(er) place with very few international flights and a lot of them are propellor planes. The building of the airport is also quite interesting. To me it looks more like a building in Tibet than in Cochin. 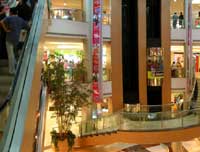 This is another shot of the same Mall I posted yesterday. I wanted to buy a pair of shoes and also to use the gift coupons of Crossword I got from office for conducting trainings but in all that time, I could just pick a pair of shoes, I guess crosswords will have to wait till next weekend.

This is Inorbit shopping Mall in Malad, Mumbai. It's quite big and has a hell of a lot of shops in it. It is the kind of place where you are better off without your credit cards if you are in impulsive shopper. Went there on Sunday to buy shoes ane spent about 4 hours there. Quite a nice place, specially the spacious parking. 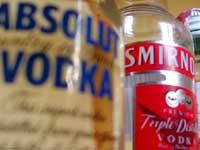 The New Year is not new anymore but I still have some images taken during that time. I bought these miniatures to celebrate the New Year but they are still unopened ...well most of them. 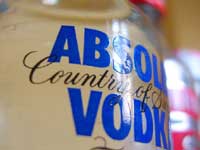 The New Year is not new anymore but I still have some images taken during that time. I bought these miniatures to celebrate the New Year but they are still unopened ...well most of them.

Two characters, created by two differnet people, yet somehow fit so well together. This is one of the many claymodels that my creative colleagues have made. I simply can't get over the chemistry between these two characters. 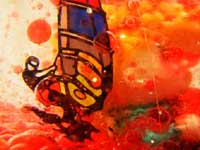 Let's take a break from flying objects, we'll return to them next week. I got a present that is a pen stand and something like a snow globe. Instead of snow, it has red and clear liquid of different viscosity that doesn't mix and when shaken, you see a lot of tiny red bubbles. Two surfers were thrown in for good measures along with a romantic couple. 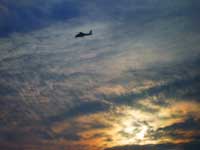 It's bad that you have to hold the phone line till your turn comes and someone can answer your call at the other end. What is even worse is that your plane or chopper has to wait and circle above the airport and wait for it's turn to use the runway and you don't even get to listen to music. Looks best with black theme. 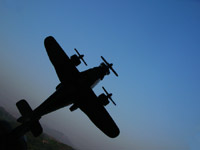 Here is another picture of a plane, this time a propellor plane. This one was taken from my livingroom window. Tommorow again I'll post a chopper that I clicked from my office window. 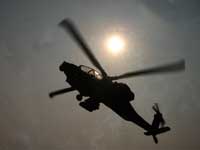 I am posting two images on one day after a long time (with the exception of Christmas). I am posting these together because both of them were shot on the same day. The first is a bike built by Orange County Choppers and the other chopper is an Apache helicopter. 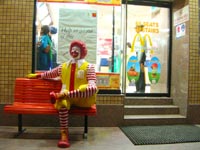 I took this picture during my visit to Delhi. This is outside the McDonald's in Vikas Puri. What I find amusing is the poster behind Ronald McDonald. Seems like McDonald is geting bored of him and is looking for another character and they don't seem to be too subtle about it either. Well Ronald, you better start sending out your resume to other fast-food restaurants. 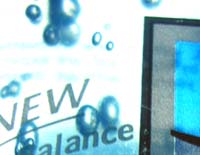 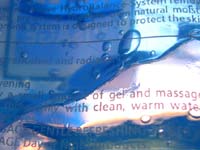 The tube of the face wash was transparent and when held against light, it was looking simply outstanding. I had to take a few pictures of it. This is the first one and the second one will be posted tommorow. This is lying on my window sill and the green at the bottom is the Aary Milk colony 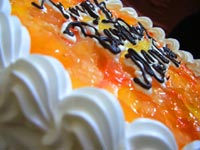 This is the cake for Manu's birthday. Manu's firt birthday was a quite affair and there was just the family to celebrate it. We thought to have a party when he turns 2 or 3 so he would know that the party is for his birthday. We have seen kids getting cranky on their birthday and were expecting him to do the same but he, on the contrary, was quite happy. 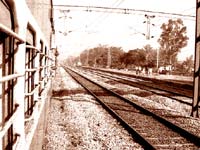 This is Himalyan queen that goes from Delhi to Kalka. We took this train to go to Parwanoo. I saw a very similar image here and decided to post this one. I got the kind of effect I was looking for, maybe it would have looked better if I had shot a steam engine. That definitely would have gone better for this kind of processing. 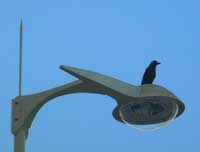 This crow was sitting on a light pole on the ramp of the housing society under construction next to my home. They seem to have this tendency to go and sit on poles and pillars like this, maybe because they get a 360 degree view from on top of poles. 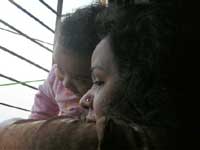 If you have been watching this site for some time, you'd have noticed that one of the favoutite spot of Manu is our bedroom window. Here he is trying to see his friend “Ritam” who lives diagnially opposite and a floor below us. 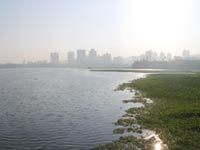 Well, it is a little late to be a sunrise but this in the first morning on the year 2006. For the past 2 weeks we generally go out on Sunday mornings as the roads are not crowded. We used to go to Powai Lake quite often and wanted to take Manu there. The head on the bottom left of the image is Manu's. 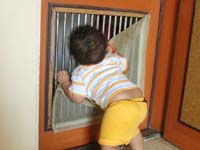 Manu likes to welcome everyone who visits us even before they come in by peeping through the fly screen, Here he seems to be telling me that the new year is here. The New Year also brings the new layout. Now you don't need to click the comment link to see what I have to say. You still need to click it if you need to post a comment. 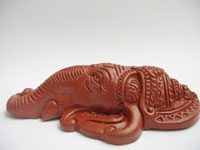 Among all gods, Ganesh is the first one to be worshipped and every auspicious thing startw with his worship so what better way to start the year than posting his image.

I have a very nice picture of Manu that I wanted to post today but I guess I'll do it tommorow. He is also happy to see the new year.