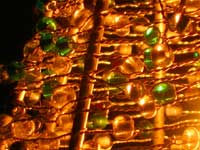 This is the same lamp posted a few days ago and this was taken on the same night I took a picture of super hero. It was kinda hard to take a decent picture with an auto focus camera as it would keep focusing the candle or nothing at all but this one came out quite nice. 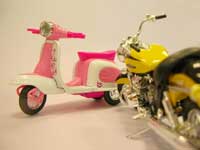 I would like to make clear that I don't spend a fortune on buying these models and some of these belong to my colleagues including these two. This is the same Lamby I posted a few days ago and this motorcycle is Honda F6C Valkyrie that you will be seeing more in the near future. 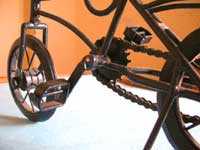 Another thing I would have wanted on my work desk is this bicycle but it is even bigger than the lamp. This is a present from my brother and he tried to keep it a suspense but I found out about it before it reached me. I don't know why but this bicycle reminds me of Gandhi. 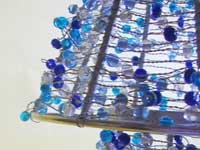 I bought this lamp during my last visit to Delhi from the same place as these boxes. Now as I have bought a new computer I am in the process of beautifying the work desk and I wanted to keep this lamp on the small shelf there but sadly it's half an inch too big to fit there. 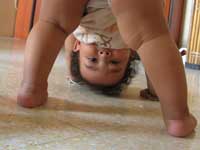 Sometimes I also feel that the world does make a lot more sense upside down. Manu has been doing this for a very long time but he has not given me an opportunity to click him like this until now. Every time he did this, I'd go running for the camera and buy the time I am ready to take a shot, He'd be standing straight. 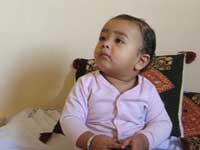 Manu is restless. He can't sit idle for a second unless, of course, he is watching TV. While watching TV, you can see the concentration on his face. I hope he will show same concentration when he goes to school. 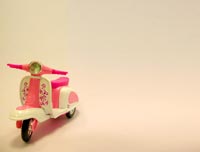 Lambretta was a craze in the 70's. In Hindi movies we see the heros riding Hayabusas but in 60's and 70's they used to ride these Lambys and I remember in one movie Rajesh Khanna's dad saw him with a girl on his scooter and when he got back home, he removed the pillion seat. Back then I thought they were ugly but now if given a choice, I'd like to buy one and ride it to town on weekends. 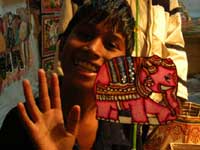 This is one of the kids at the shop selling paper items that include the lamp I posted yesterday. I wanted to take a shot of the entire shop and he just won't get out of the frame. Initially I was irritated but then I realised that this makes a far better picture compared to one of just his shop. 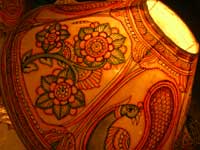 By now, you can guess that I am really fond of Dilli haat. This picture was also taken there. This shop had a lot of things made of paper including this lamp. Tommorow, you will see the guy selling this lamp. 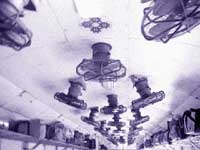 Look inside a train compartment if you need to see something really robust. You will see things here that are built to last, they are not like the delicate equipments we have at home but things built like tanks. Take these fans for an example. They run non-stop for hours, as long as the journey and their cast iron bodies can kill if they fall on someone. 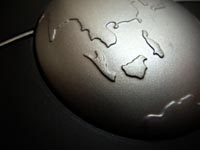 Currently photography is like an addiction to me and till I click some pics in a day, I feel itchy. The itch on one of these days resulted in this. This is a round button like thing on the cabinet of my new computer. The power and rest buttons are around it on an axis as if revolving around this. Didn't knew we had two moons. 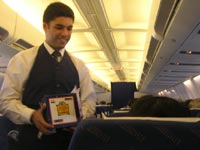 Richard Branson of Virgin thought of the bowl full of useless coins of different countries he had traveled to and though that he can ask people for those coins of foreign currencies during the flight and give it to some charity. Jet Airways does the same, here it is not the unwanted coins but anything the travelers are willing to spare. 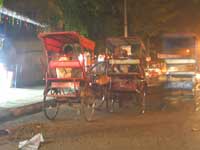 “We thought that India was a very modern country but you still have cycle rickshaws here.” was a comment made by a Pakistani delegate. People from outside may think they are cure and all that but in reality they are a bloody nuisance and traffic hazard. You don't need a driver's license for one of these and you have people who have no knowledge of traffic rules pulling them. 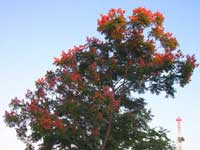 Nangal is very pleasent place to go to when you are sick of the crowd and stench of Bombay. Nangal has it's own pace that is quite leisurely and it has remained the same ever since that place was set up. It has not been overly commercialised and you can still see a lot of open spaces as in this image. 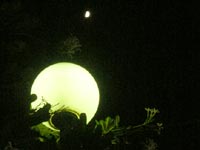 While waiting to be served in Dilli Haat, I was looking around to see what can I click and I found this lam partly concealed in the trees and the moon above it. I guess it might have worked better if the lamppost was a little taller, that way the difference between the size of the moon and lamp shade won't be so great. Looks like a setting for a horror movie. Or does it? 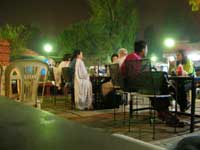 This is the food court of Dilli haat, one of my favorite place in Delhi. This place has something or the other on all the time and you can get some good bargains there on ethnic stuff. The food served is also decent. You can get food from all the parts of India. A must visit place during a Delhi trip. 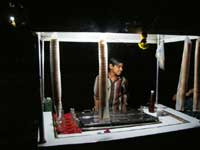 This is the ice cream vendor outside my society. There are a lot of these unbranded ice-cream vendors in Bombay and strangely all of them have the word "Mewad" in their names. Maybe the first one did well with that name and everyone followed him. Anyway, they serve some good stuff especially with the falooda.

This was taken during my last visit to Delhi, on the same day as this picture of India Gate. For those not from India, India Gate was built in memory of soldiers who died in the two world wars. This place is surrounded by lots of government offices, parliamanet and president's residence and serve as a big roundabout.

Last weekend my friend Nitesh and his family were visiting us from Delhi and in the evening we went to the Juhu beach. These two kids were playing in the sand and I loved the contrast between these kids, their toys and the sand. There is something about the sand that attracts the kids and Manu is not an exception. Later that evening, he had a good time almost burying himself in the sand.

Manu got a return gift at a birthday party. It is a mini projector. Very much like a torch, it has a lens and a small slot to fit a circular slide of small images. When you point it on a wall. 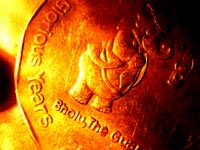 This is another two-rupee coin, made to celebrate something about the Indian Railway. The character you see here was created for Indian Railway. Indian Railway, I guess, is one of the biggest employers in the world and carries are more people than any other transport provider in the entire world. I have my share of interesting experiences in Indian trains. 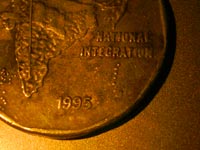 Usually the Indian coins have the crest on one side and the denomination on the other side. Coins to commemorate special events have both on the same side and the special event/thing on the other. The two-rupee coin is an exception, it always had an Indian map “National Integration” as in this image, shot in the light of a screwdriver/torch. 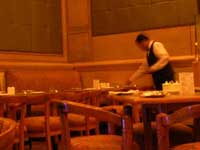 Again a shot from my archives, This is the same restaurnat where I took this picture of Daya Nayak. The name of the restaurant is ZEN and it is located in Connaughat Place, Delhi. 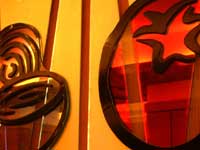 Third and final picture of the vegetables. These 5 feet big onions and tomatoes are in complete contrast with their microscopic cousins I posted before this. Maybe I'd like to ask them why have they not put pictures of cheese anywhere.

I had posted a picture of Onions on the 1st of this month; this is a shot on Tomato photographed from the same plate. When you look at the pictures, you'd think that the food served here is quite healthy while in reality, with all the fat, is anything but healthy. Why do I go there? Well I'm sure you must have heard about the seven deadly sins. 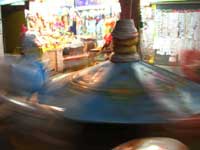 This is an old shot, taken on the same day I took this shot of Ronal McDonald. 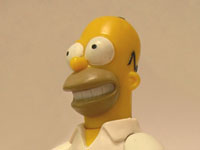 Two of my favorites—Harley Davidson and Homer Simpson. For three years in Australia, I watched every episode of Simpsons that was shown on channel 9. This reminds me, there used to be Mash before this and Neighbors before Mash. I didn't have a remote and I was quite lazy so I sat through the torture of Neighbors to avoid changing the channels when MASH comes on. 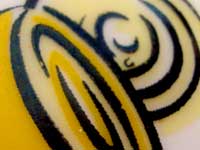 Exactly a month ago I went to Pizza Hut. I like the style of illustrations they have on their and menus and plates and ended up taking some pictures of it. This is an onion printed on the plate. I will be posting some more veggies soon.