My phone camera gives me the option to see myself in the outside display but only in four shades of grey. This is a shot of that display using my normal camera. Yes I was holding the phone in one hand and the camera in the other and trying to compose the shot in both of them. Thanks for the response to yesterday's picture, I quite liked it but was not sure if anyone else would.

This is not a peeping tom trying to get a glimpse of what is happening inside. He is the guy who was in this picture as well. Here he was sitting on the scaffolding waiting for his partner to bring the "chapra" (window shade). Got really excited when he saw his picture and wondered if I could take it out and give it to him. 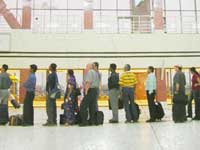 You have your boarding card with you; your seat number is written on it so you won't get to pick your own seat. The plane will not take off till everyone has boarded and even after everyone has boarded, it is more likely that the plane will wait for 30 more minutes for it's turn. Yet we queue in front of the gate even before it is open. This image is a combination of two images. 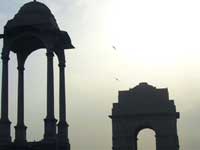 I was told that there used to be a statue of Lord mountbatten in that structure near the India Gate and it was vandalised by a mob that protested the presence of a statue of a Brit at a monument like this. I don't know if this is true or not. Do throw some light on it if you know the truth.

Delhi is a place where I have spent most of my life and I am really fond of the city and wanted to show Manu a few good places. I took him to India gate during my last visit as well but the lights were switched off and he fell asleep by the time we got there. This time, however, he enjoyed it thoroughly. 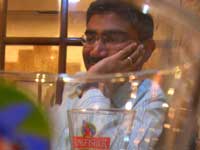 “...or have we had enough?” This is what Nitesh seems to be thinking. This is in the same place where I took this picture. Usually we go to Zen when we go to Connaught Place and I think we should have gone to the same place this time as well. 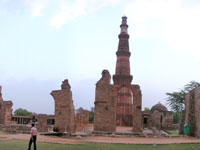 I'm back in Bombay and this is my first post after my return. This is the famous Qutb Minar situated in Hauz khas of New Delhi. Click on the image to see the bigger version. The woman inpink is Mira, the kid in front of her is Manu and the boy in chequered shirt is Bharat-my nephew. You will be seeing a lot morwe images from my Delhi trip. 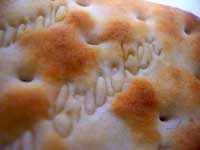 When you spend more time indoors than outdoors, you are bound to take pictures of dull objects like this, or in words of my mom, you will play with your food. What I like about this picture is the fact that it looks a lot fresher than it really was. Actually it looks more like just baked soft bread. 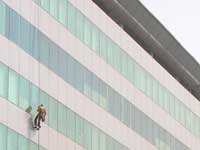 Some people spend a lot of money to do this while others, like him, get paid to do it. Now this guy has a jog to envy, adventure sports for not only free but getting paid for it. “Jaani, jinke ghar sheeshe ke hote hain, who parda kar ke kapde badalte hain.” 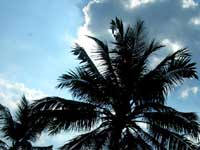 This is another image I took while in Kochi, taken at the same time as this. I thought about posting it and finally did it because I just love the palm tree here in front of the clouds. 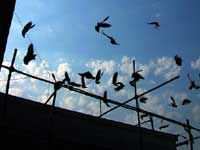 Well...not really. It is more like flight of scare. I took some pictures of these pigeons sitting there quietly but it was not exciting enough. To add some action to it, I scared them first and too this picture when they flew. BTW this scaffolding is what is holding our building together. 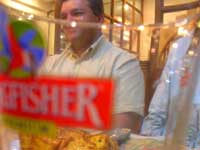 This is the first image I am posting from my visit to Delhi and there are a lot to follow. Nitesh Anurag and I know each other since 1982 and we got together in Connaught Place for beer. They are the two friends from school who still remain very good friends. The guy in the picture is Rama, a friend of Anurag, the plate has Paneer tikka and although the glass says PKingfisher, they served a different beer. 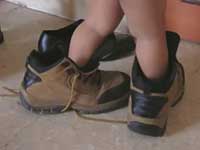 “Well I've got my shoes on and I am leaving, feel free to join me.” “Well that is fine son, you have got your shoes on but you forgot your pants.”.
Currently I am traveling and am in Delhi so I am not able to reply to your comments as I barely manage to post updates. Thanks for all your comments.

If bought in Rajashtan, you an get them for 100 bucks apiece (I guess.) Bought in a shopping mall in Bombay, they cost you 1000 for three. These musicians in really hep platform shoes were on display in “The Hub Mall”. The Hub is the place where I took the picture of the constipated man and his fancy shoes. 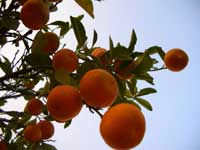 These oranges are more orangy. Have to me as they grow in our own terrace garden in Delhi. They are the same oranges that Manu tasted during our last visit to Delhi. 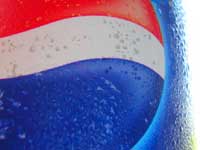 Not really. First I prefer ThumsUp over Pepsi and secondly, and most importantly, I think that these carbonated drinks are insanely high priced. For instance if I had decided to make a glass of Lassi or milk shake, it would have been considerable cheaper and infinitely more nutritious than this. 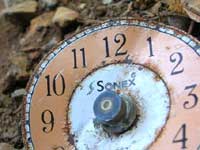 Taking Manu out in the morning is a rewarding experience, not just as a father but as a photographer as well. He keeps going into nooks and corners I won't go otherwise and keeps finding different things for me to photograph, like this dial of a clock. 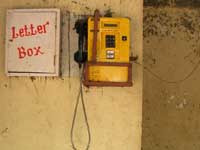 Whatever you choose to do, you won't have to go too far. This is outside my society's committee's office. Have you wondered why the pay phones are always so big, may be to discourage people from stealing them. 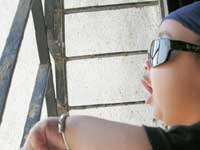 In yesterday's response, Manu has decided to put on some shades. I put the bandana I wear under my helmet on his head and then decided to complete the look by adding shades. Any modeling offers can be sent to my email ;) 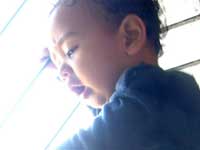 Among the shots I clicked, I liked this one the most because of the overexposed background. I don't know why, but is somehow this picture has a cinematic kind of feeling…or may be not. 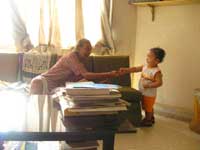 My neighbor Mr. Aloke Dasgupta has collected a dozen empty cigarette packs, a plastic Easter egg, a plastic knob kinda thing and two pens with whom Manu plays whenever he goes to his house. Here Manu is offering him a dried flower. The moment we open our door, Manu dashes into Mr. Dasgupta's house whose door is always open. 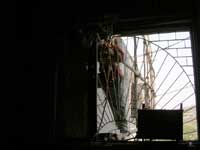 This man is installing a “chapra”(window shade) in our living room window. He was welding a frame and kept blowing our fuse with his welding machine (the thing in the bottom right corner).

Sometimes I see shots like this and visualise that these are not scale models but the real thing. I am a professional photographer, chased by every automobile company to shoot their car and bikes. Then I wake up and get back to my 9 to 5...maybe some day. By the way, this is a Honda, same as this and this one.

There are few shots of this place that I have posted earlier as well. This is the pantry of my office. 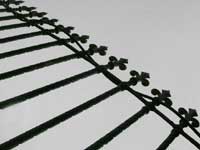 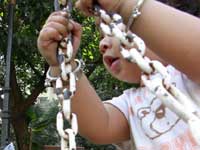 Manu has not figured out what to do with the swing and the see-saw in our society and does he enjoy it. On the swing he sits with his legs on both sides to maintain his balance. He'd run to either of them and wait for Mira. On the weekend we went downstairs for a walk and manu got a bonus ride on this swing. As a kid you learn how to be happy with the smallest thing and as a grown up you learn how to be upset about the smallest thing. 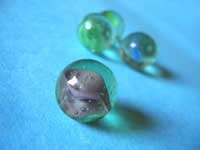 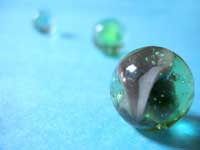 One of the difference I see between the kids today and us as kids is that we used to play a lot of games without much investment like Kanche or marbles. My elder brother Sanjiv used to borrow marbles from me and return them to me later along with the ones he would win. I guess I should have been a money lender...but I guess every borrower is not like my brother. Guess what today's heading means. 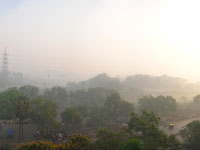 The guess of anyone who has seen the images I posted on last weekend would be that this is somthing like Whisky in Coke. Well if that is your guess too, it is wrong. What I have here is Ice tea and although it's April fool's day, I am not trying to fool you. 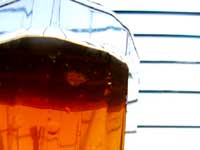 I didn't made a fool of you yesterday but god certainly did. Actually he has been doing it too often for it to be an April's fool joke. Take a look at the picture. What does it look like. It looks like a very nice morning in a hill station with a lot of fog and reasonable cold weather. In reality it was 27º with the humity at 89%. The more fog I see from window in the morning the hotter it is going to be. CLick here for a bigger image.