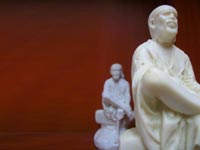 This image is specially for a few of my cousins who have a deep faith in Shirdi Sai Baba. Ever since we have moved to Bombay anyone we know going to Shirdi stops at our place. These two statues were also given by people visiting us on their way back home from Shirdi. I guess I should also go there before I leave Bombay. 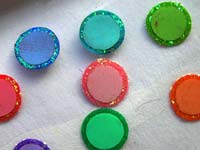 “Mama binni” is what Manu calls them. These are Mira's bindis and Manu really likes to play with them. He takes them and sticks them on his face like Mira and feels really happy. It is beacuse of these hobbies of him we have emptied the two drawers next to our mirror. Nothing is safe is place where Manu can reach.. 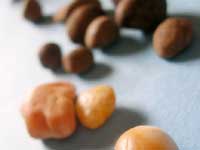 Another shot of the pebbles picked up by Mira and Manu. One day a friend of Mira commented that she likes these stones and manages to find them as well while all everyone else sees is just ordinary stones. I guess this goes on to prove that we shall find what we seek if we just look carefully. 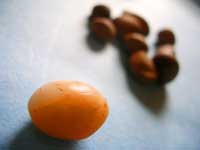 Ordinary pebbles Mira and Manu picked up in the play area of our building, they both are fond of unusual stones like this one. Are they precious? Well the answer to that depends on your interpretation of what is precious. If something you can sell for a lot of money is precious then these are just junk. If finding happiness in the small things in life is precious, then these are priceless. 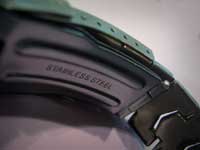 This is the band of my wrist watch. I was trying to take pictures of something else but that didn't work out and I ended up taking pictures of my watch, my phone, the Ganpati you saw a couple of days ago. I didn't manage to achieve what I wanted to but I guess I ended up with even better shots. 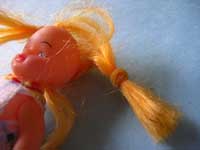 Well what more can you expect when you hand a doll to a boy. We didn't knew it was going to be a boy when we bought this doll (pre-natal sex determination is a very serious crime in India.) I still decided to give this doll to Manu when he was only a few months old, he looked at it for a minute then laughed out loud as if I had told him a joke. What happened next is in front of you. 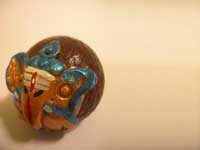 In north India Tuesday is the day of hanuman but here in Bombay it is the day of ganpati or Ganesha. Given to me by an ex-colleague, this idol is made on a Supari (betel nut). Ganpati is the first god to be worshipped at any prayer ceremony and he was the first recipient of an organ transplant. 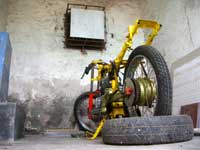 Last night a monster came to our building and devoured the motorcycle of my neightbour leaving behind this. The owner of this bike had another one that I saw a couple of years ago. It was similarly stripped (it was supposed to be overhauled) and I saw pieces of it in his home before it completely disappeared. Maybe he practices in some ritual offering bikes as a sacrifice to calm the monster. 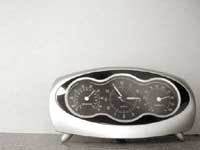 With so many dials, it looks more like a dashboard of a car than a clock. The two dials on the side tell the temprature and the humidity. I saw something like this way back in 2003 and wanted to buy it but my colleagues from QAI gave me another clock as a farewell gift. Yesterday there was a good deal on these at D-Mart so I picked one up. 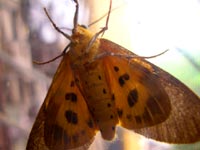 A moth trapped between two window panes probably came here looking for something woolen to eat. I had a hard time taking a picture as the auto focus of my camera just refused to focus on this moth except from this particular angle. Monsoon in Bombay brings these insects and lots of fungus. 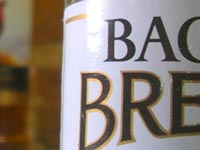 This is to complete yesterday's picture and I guess the series (at least for now). The only difference is the focus has shifted to the other bottle. If you liked these shots, you will also enjoy the shots of Foster's beer I posted sometime ago. One, two and three 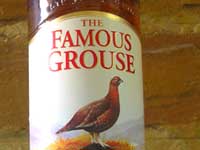 Second picture in the series of alcohol bottles and no points for guessing the name for tommorow's post. Taking pictures like this with Manu around is not easy, I have to wait for Saturday afternoons when he is sleeping to take pictures so that he doesn't pull the sheet underneth or run away with props. I myself had to be careful with this bottle to not drop it accidently. 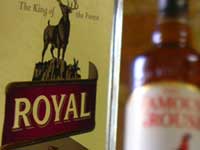 For some time I was thinking about taking some pictures of these bottles and finally got a chance. After some initial shots I realised that they moke more sense together than on heir own. That bottle of Famous Grouse was bought during my London trip in 2004 and it still lies unopened. 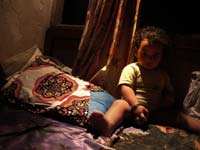 This picture was taken at the same time as yesterday's picture. After dinner this is the play area for Manu, the corner of bed near the window and the chest of drawers right next to it. He'd climb on the chest of drawers and would ask me to clear everything from there by handing it to be one by one. Right now he is busy with the bottle of Iodex. 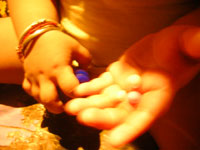 This is Manu showing me the styrofoam balls he collected at a birthday party. The tube light in our bedroom was busted and we had to switch on the two small lamps that have yellowish lights and I must say that it worked out quite well for this shot. Picturejockey has been featured in Mixpix awards a few days ago. 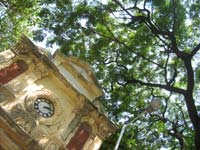 We went to Mahalakshmi temple while my cousin and his wife were visiting us from Delhi. This is a gate that takes you in another temple and then to the main road. 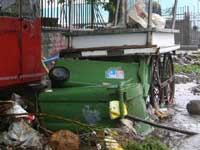 Some days we take an off and some days an off is thrust upon us. 4th July was one such forced off when most of the people in Bombay either decided to or were forced to stay home because of heavy rains. From my bedroom window, I saw these garbage bins floating past our building and when rain stopped, I saw then trapped by an Ice cream cart. None can say no to Ice cream. 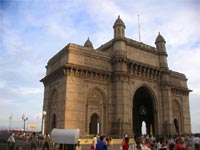 As mentioned in yesterday's shot, Gateway of India was built to welcome King George and Queen Mary. Now India is a democratic republic and no longer a part of British Empire so what do you do to monument made for Brits? Well just add a statue of Chhatrapati Shivaji maharaj in it. I was surprised to see that they are actually planning to put a statue of Shivaji inside the India Gate.

New image gallery :: Mumbai Monsoon, the good, the bad and the downright ugly

It rained a lot during monsoon last year was not any different...well it was. It rained and rained and rained on 26th of July and didn't stop till the entire Bombay was under water, at some good places till knee deep and in some bad places, more than a floor deep. I have taken a few images during the monsoon and now the next monsoon is here, I'd like to share these with you. Some images reflect the beautiful, romantic and everything positive aspect of the monsoon and some show the ugly face of it.
13th July 2006 :: Welcome to India, King George V and Queen Mary 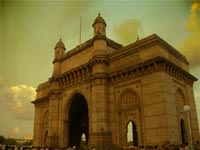 Gateway of India was opened on December 4, 1924 by the Viceroy, Earl of Reading to welcome the King George V and Queen Mary. One of the most famous tourist spot in Bombay located at Apollo Bunder, where the Taj Mahal palace hotel is located as well, you can get boats to Elephant caves from here. 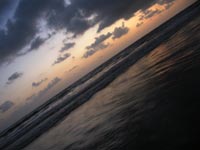 My wife mentioned to someone that she feels like sitting here for a while and that person was a little surprised because he feels this water is dirty. This is rainwater and water from the ground and I am sure much cleaner than the Juhu beach where the sewage of the entire city is dumped. 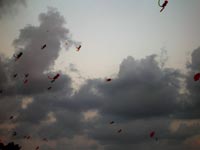 Juhu beach is full of vendors trying to sell something or the other to you including these guys who are selling monkey like baloons and small aeroplane like devices that work very well on Juhu beach but just refuse to work when you get home. 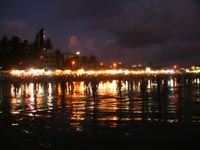 Last week I posted some pictures of Lonavla, before that was Phoenix Mall and this week I am going to post some pictures of Juhu beach. The lights seen here are from the food stalls lining theJuhu beach selling bhel puri, pani puri, sev puri, dahi puri and all other kind of puris. 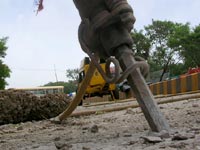 I saw this drill equipment and a few workers resting near JV Link Road (a world bank project) and asked them what's up. “Other roads break on their own after 10mm of rain. This road didn't, so we are here to help” He said and started digging a perfectly good road. 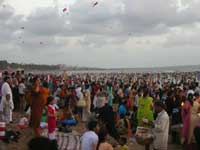 A few weeks ago we went to Juhu on a Sunday and found it to be packed like it was a Maha Kumbh mela. Anyone who comes to Bombay goes to this place for two reasons, one is the fact that a lot of them come from places that don't have a beach so anything will do for them and second is that like a lot of other things, Bombay has created a kind of an aura around Juhu. 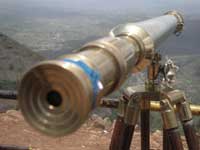 Tiger's point is an observation point and there are a few things that you can see from here. You don't see the coin operated telescopes in India. What is indifference from tourism department, is a business opportunity for an entrepreneur who got there with a telescope and knowledge of what is down there. 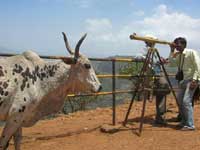 “That is a cow you bloody idiot. She is waiting for her turn, she is next in queue after you.” This was one defiant cow who didn't wanted to be tied down and was walking around with a pole tied to its leg that she must have uprooted from where ever it was fixed. 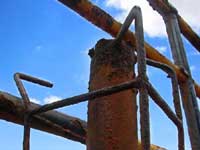 The two famous things of Lonavla are fudge and Chikki (a misture of crushed groundnut/dry fruit and jaggery). When something is famous, everyone is selling it, out of 10 shops 7 are selling chikki and fudge, just like Panipat where almost all the shops sell “pachranga” achaar (pickle).Talking about speciality, I know tailors who specialise in “ladies, gents and children wear.” 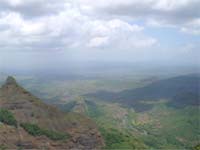 After Phoenix Mills, let me show you some pictures of Khandala-Lonavla where I went a few weekends ago. To start with, here is a panoramic shot of Tiger's point and this will be followed by more lonavla shots. Read about our trip here. 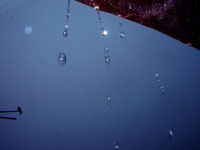 The monsoon is here and it is here in full force. It has een raining continously since Friday night. I planed to visit a friend from work this weekend but the rain ensured that I was indoors the entire time which is not bad considering the last three hectic weekend. While you are here, check out the monsoon image gallery, featuring the 26th of July last year and some thoughts about it.

This kitten is curious why don't I get Manu a pet. Whenever Many spot this kitten, he gets really excited, one day he crawled under a parked motorcycle to feed it some cake. Earlier the kitten used to get scared by the screams and running around of Manu but now he seems to have realised that Manu just want to play. 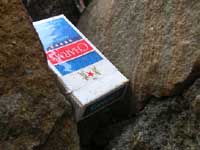 When I came to Bombay to check out the city before moving here, I stayed at a hotel near Chakala Cigarette factory, owned by Godfrey Phillips I think. As far as this pack is concerned I thought it was kept there by a security guard. Wanted to click it but didn't have my camera with me. Next day when I had my camera, it was still there.