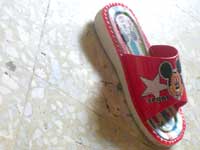 “Choo” is what Manu calls his shoes and sandals. Everytime he is going downstairs, he runs to the chair and jumps on it so that we can put his shoes on. In the morning we went to the temple and thought it unnecessary to put on his shoes but he won't step out without them. Finally he put on these slipers and then went to Mndrrrr (mandir or temple).

The staircase of my building has been turned into a dumping ground by some people on our floor who are getting their homes renovated. This painting and bike is lying there along with some mattresses, chairs and what not. By the way Hero cycles are the largest producers of bicycles in the world. 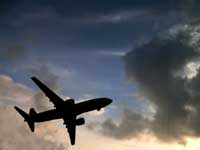 Berry has been suggesting for some time that we go to Santacruz or Kurla to take pictures of aircrafts taking off or landing as the height of planes is quite low at these two points. Now since I have a 420 mm lens, it makes sense. Still we haven't got time to do that so I decided to take some shots from my office window from where we can see planes taking off and landing. This is a Boeing 737-800, Berry's private jet and to see how it really looks check here. 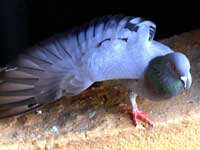 As I mentioned I couldn't go out for photography over the weekend, I decided to take a few pictures from my living room window. There are a lot of piegons that live in our building and this one was sitting at the shaft of drainage pipes. He is not one footed, the other one is hidden behind the wing. 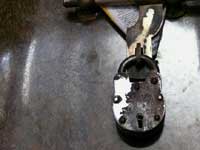 My next door neighbour Mr. Aloke Dasgupta is in UP shooting for a film. In tha past we have tried telling the paper guy almost everyday not to leave his paper since he is not home but he just won't respond to that or the big “NO PAPER” pasted on the door. What stopped the paper guy from delivering the paper was an old one left at the door.

Ever since I have bought my new camera, I am dying to try it out but for some reason or the other I am not able to. I had planed to go and buy a memory card and a bag for the camera yesterday but was not able to as both Mira and I were sick. I did managed to get out of the house and take pictures of a few things around the house including this lock of my neighbour. More to follow this week. 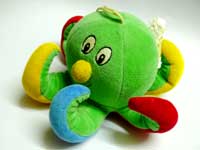 Oswald, the blue octopus is one of Manu's favourite cartoon character. He couldn't say easy words like Noddy but could say Oswald and his concentration while watching Oswald can only be seen, not explained. I guess this is why he couldn't resist picking up this toy while shopping some time ago.

A boy was looking for work in a rich suburb and after knocking on many doors, he finally got a job. The owner of one house gave him a bucket of paint and a brush “Go and paint my porch”. After a few hours the boy comes back to collect his wage. He thanks the man and informs him “By the way, you have a Ferrari, not a Porsche.”

Anything special about this picture? Well this is the first picture I have taen with my New Lumix FZ50. Yes I have finally bought it and am eagerly waiting for the weekend to play with it. How much did it coast me? I guess Manu's expressions say it all. 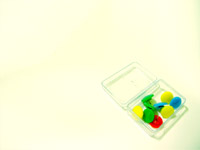 Slowly the reserve of pictures is declining and soon I will be left with no more pictures to post..unless I go out and take some more pictures. I am planning to go out today and take some pictures, let's see if something good comes out of that. About these pins, I am wondeing how much the cost would have gone up just by packing them in this plastic box. 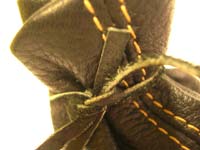 This is the same pouch as this one. I have been quite lazy and have ot replied to the comments made by all of you but that doesn't mean I don't appreciate them. I'd like to thank all you for sharing your thoughs and valuable inputs about the pictures posted here. Please keeping coming back and commenting. 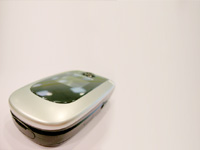 Soon after I came to Bombay, a friend of mine visited me from Bangalore. I gave him my number but he wrote it incorrectly and called the guy thrice who got really irritated by the end of it. When he came to my home in the evening and told me his story, I said maybe I should give the guy a call “My name is Navin, were there any calls for me” 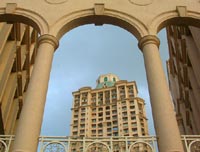 Hiranandani gardens is one place in Bombay I like and I keep going there as it is close to my home too. Check out an image gallery of Powai and Hiranandani as well. 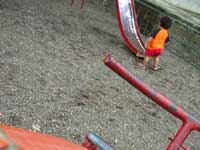 “Wow, I have the entire play area to my self. This slide is mine, this see-saw is mine, the swing is mine. All mine. Ha Ha Ha.” Was this what Manu was thinking? Not really. he seems to be a social person and enjoys more if he has the company of other kids rather having everything at only his disposal. 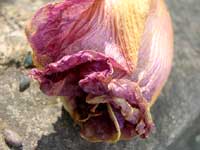 My camera seems to be suffering from Mangal pandey syndrome and it has decided to revolt. I can say that this shot is taken by my camera and not by me as it does what it wants to do and I have almost no control over it. I tried very hard to take more pictures after this but the camera just won't agree with me.

This is a small pot filled with water and plastic fruits. The orange is shapped a little odd and looks like a golf ball. I am getting a little bored because I am not able to take new images and don't have the same enthusiasm for posting new entries as I had sometime ago. I may take a little break from this site. Maybe when I visit Delhi. Let's see. 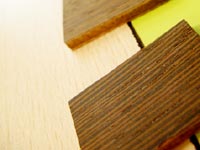 Guess what this is. JP you can't as you are the one who suggested this shot.

Same doll whose hair Manu has pulled and who has been featured here earlier as well. This post processing is a little extreme but I am quite happy with it. Your comments are welcome. 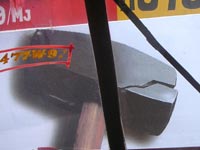 Indeed worth a thousand words. I saw this ad behind a BEST bus. No words would have been able to deliver the same impact as this image and I am sure I will remember this ad for a long time. Any one who has worked in advertising would know how difficult it would have been for the agency to convince the client to do this ad. 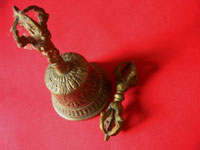 I got this bell and the the other thingy from Dharamsala in 2003. I did a search for Tata Indicom Broadband on Google and Blogspot and was surprised by the results I got. There are a million people out there complaiing about the services of Tata Indicom and that convinced me that the chances of my problem being resolved are same as a snowflake in hell.

Yesterday I mentioned that the temple had two gates, this is the second gate, the one on the main road. This place has a lot of pigeons as well and some of them seem to be getting too friendly with Ganpati. The updates are going to be a little irregular as despite recharging my Tata Indicom connection, the status says expired.

This clock was at the game to a temple near Mahalaxmi Temple in Bombay whaere I went a few weeks ago. A zoomed out version of this place can be seen here. This temple had two gates and I will post the second one tommorow. One gate is at the main road from where one enters and exit from this one to go to Mahalaxmi Temple.

This is an attempt of a paning shot of a speeding snail. When I stoped and asked him where was he headed, he told me he was headed to the Pirelli tyre store. “Afterall speed is nothing without control.”, he said. 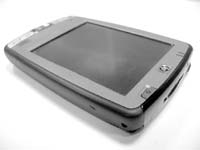 At least by me. I took some images from my dying camera yesterday afternoon and it cooperated. Then I heard drums and went downstairs to take pictures of Ganpati but the camera just won't work. It won't let me take a single picture of Ganpati and when I got back home, it again started working. So in absence of a pictrue fo Ganpati, here is a picture of a PDA. 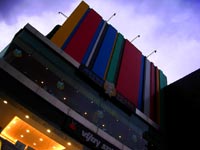 Recently there was a big protest over the name of a restaurant in Thana. Jews were upset because it was called “Hitler's cross”. Eventually it was renamed as “The Cross” This restaurant in Hub Mall, Goregaon is called Machu Pichu, if spoken fast enough, it sounds like two really bad swear words in Hindi. I'm sure if I point this out to the right people, a name change would be demanded here as well.

Well not really, it is quite calm in there. Actually too calm for the surfer inside. I am getting very annoyed by Tata Indicom Broadband service, they call you for renewal and when you tell them about a complaint you made a month ago, they apologise and beg for one more chance. They promise to call you in 24 hours but never call back. In my opinion they are the worst ISP.