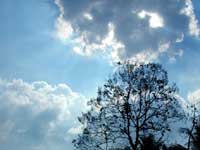 A silver lining to the dark clouds isn't that what keeps us going. Well it kept me going. I really liked the effect so I kept clicking and got quite a few good images. This was also taken during the trip to Kochi in January when I took this and this image. 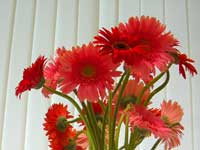 Since I am not able to mail you, thanks a lot for the all the encouraging comments. Keep them coming. Same flowers as yesterday. Initially I moved the fire extinguisher away but put it back next to the flowers as i liked the shot better this way, don't know why. Don't miss the bottle of bisleri modified into a flower vase. 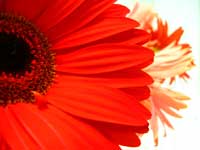 For the past few days I am trying to avoid photographing objects indoors or in other words, I am aiming to shoot more pictures outdoors but I still run into things that attract me. These flowers were on the workstation of a colleague. 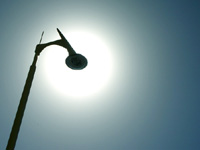 I have taken a picture of this lamp post earlier as well. While walking from the parking to my home in the sun, I got this idea of taking a picture of it covering the sun. 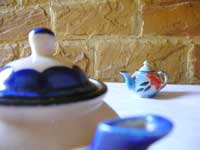 Well... believe it or not but the weekend has gone faster than it arrived and if you are still hungover after all the drinks, I recommend some tea. These teapots were bought from a fair in Hirnandani Gardens in Powai. The one in the forground is a little smaller than usual and the one in the background is a tiny one, say about 5 cms high. 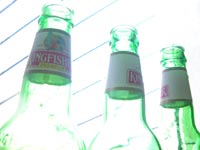 After sitting at home for some time, I get restless and I need to head out and but sometimes it feels good not to do anything, just sit at home and watch the clock tick. It is called "vellapanti" in Punjabi. That is exactly what I plan to do...or not do today. BTW I love Sundays because I was born on one. 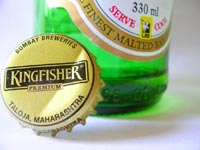 I have already mentioned what I think about Fridays in yesterday's post. Saturdays are pretty much the same, whole day to myself and my family and another holiday to come. If this is not bliss, I don't know what is and on a hot day like today, what better thing to do than having a cold beer. 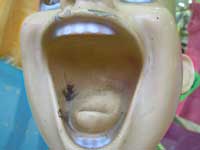 Thank God It's Friday. A perfect Friday smile. Need I say anything more. The best day of the week filled with anticipation and with two holidays coming up. This is a mannequin in front of a shop in Irla.

“...by the end of the day or someone is going to be in real trouble.” I may have trouble in delegating work but Manu seems to be quite natural at it. Here he is ordering someone ...or may be just telling our neighbour that smoking is bad for him. 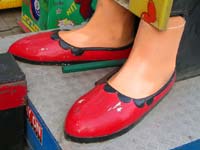 Well I don't know what these shoes are meant for. These shoes belong to the constipated guy who was here just yesterday. Look at the face and then look at the shoes...what a sissy. 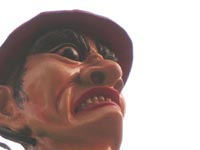 With his nostrils flaring and the teeth clenched, it seems our man here desperately needs some laxative. This very interesting face belongs to a toy/game just outside The Hub in Goregaon where this image was taken. 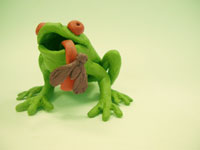 Another of the clay model created by my colleague Chetan Patil. personally think this is among the best he have created so far. Seems like he is just about to jump. 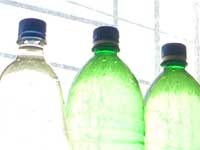 I was taking some pictures of Manu in the kitchen and got these bottles of 7Up and ThumsUp (now used for water) in the background. The over exposed bottles look really good. I tried to shoot just the bottles but this time I had to change the exposure settings of the camera to over expose the bottles. I am now planning to get some more coloured bottles and shoot them. 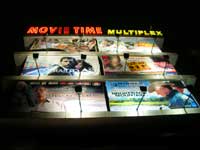 The Oscars have just concluded and this cinema also is trying to cash on to it. It is screening Brokeback Mountain and A history of violence, both nominated for the Oscar along with some popular Hindi films including Taxi No 9211.

The cats in Greenfields live a good life, the dogs don't chase them, the people is society are kind to them and occasionally feed them as well and there are plenty of places to have a nap. This one doesn't seem to be too pleased to be disturbed. 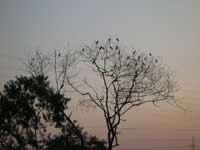 “I want to have a meeting and I want the entire team to be present there.” This is what the Lead crow must have said the previous evening. The team seems to be quite scared of the lead crow, that is why they all have gathered here right after sunrise. 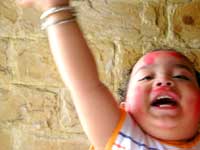 After school, Holi means Nitesh. My holi celebration would start with him either by his coming over to my place or me going to his place and would end with him. I remember once we had Scotch in “kanji” at his place. Sadly for the past three years, it has been a very dry, in both sense of the word. Here Manu is enjoying the colours we played with at home. 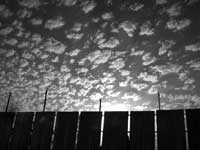 For the first time in two years I have seen it rain in Bombay at any time other than monsoon. Last thursday it rained and gave the Mumbaikars a trailer of the horror movie we are going to be watching in monsoon. “Jaani, yeh Bambai hai, yahan bacha bhi sadak par su su kar de to baadh aa jati hai.”

India indeed is land of opportunity. Over here, if you are willing, you can start any business with a very little money. Opening a saloon can be expensive but not if you are ready to start your saloon on the footpath. This guy has a brisk business with customers queuing up. 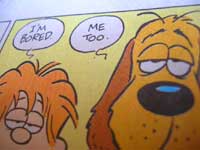 This describes my current state of mind very well.

I have not been taking pictures for some time and that made me damn restless. On Wednesday, I was down with fever so stayed home. In the early evening, I felt better so ventured out to take some pictures. Even before I could leave my floor, I got a good shot of this elevator shaft. How I managed to do it, it is an old elevator with grille doors. 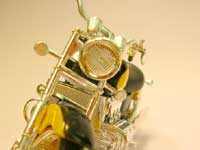 Another replica that I found on the table of a colleague. Call me prejudiced, but I'm not so keen of japanese bikes, I always have liked Harley Davidson and apart from that I like European bikes like Ducatti, Moto Guzzi and others.

A man is born free but everywhere he is in chains. The true meaning of this is coming out here in this image of a bird flying and my office building. We may not be chained to our desks but there sure are invisible strings that keep pulling us back here every morning. 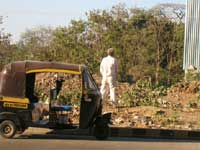 Bombay may be the financial capital of the country but it sure as hell is not treated like one. The government has failed to provide basic infrastructure and things like rubbish bins and public toilets. In a situation like this, I guess it is hard to blame this auto-rickshaw driver who decided to relieve himself by the road.

This is another thing that can be seen quite commonly in Bombay. The ads for beanbags are posted everywhere and are painted in almost the similar way. This also happens to be the closest to what Bombay has in the name of graffiti. 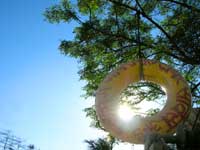 Not exactly. It is shop that fixes punctured tyres. These signs are unique to Bombay as I have not seen these signs in any other city and I guess they are a lot more economical and effective than getting a board painted. 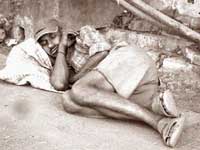 Study hard so that you go to good college, work hard in college so that you gat a good job. A good job will ensure that you make a lot of money and when you have money you can relax. “Well isn't that what I am doing right now”. Said a guy taking a nap in the middle of afternoon on JV Link Road.

A shot of Priya Village Roadshow cinema complex in Vikas Puri, New Delhi. This is another place where I like to hang out while in Delhi. Right in front of this cinema (from where this picture is taken) is a food court serving all kind of food, but my favorite is dim-sims or “Momos” as they are popularly known in North India. 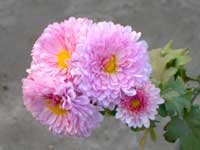 Is this the season for pink or what? First it was a Lamby now flowers. These flowers, I think Chrysanthemums, grow in the terrace garden of my brother in Delhi. The same garden that has his orange tree that Manu is so fond of. 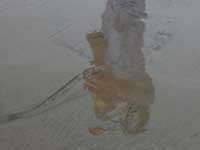 One of the places to go if someone visits us is the Juhu Beach, especially if the visitors are from up north who don't live near the sea. This time Nitesh and his family were visiting us. We did go to the beach but didn't let Manu in the water that is quite dirty.

When everyone is trying to get maximum out of minimum, it is satisfying to see that there still are some things where attention is paid not only to how they work but also to how they look. This was taken outside Dilli haat. I guess by now you know enough about Dilli Haat.