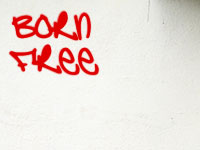 Need I say anything more? 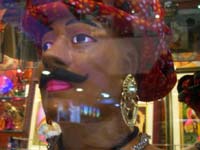 Now I can understand a tawiz but a tawiz size of a photo frame in a little too much and the chain seems like an influence of too much of rap music videos. I don't know what is with such elaborate earrings. And the lipstick! Please tell this guy that no men has used lipstick after Manoj Kumar and Rajendra Kumar. 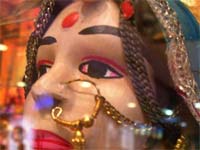 As you enter the Hub shopping centre in Goregaon, you see the window of a shop selling show pieces. Everytime I go there, I do find something or the other to photograph, including these flying musicians and this constipated man. 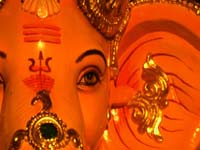 I got used to amazingly good results with a point and shoot camera and now I am getting used to a Holga kind of experience. The camera will start zooming as soon as switched on so I have to kind of struggle with it for not zooming and will take only one shot. For the second shot, I have to switch it off and on. And it has some attitude as well. It will allow me to take picture only in default seting, no changes in that are allowed. 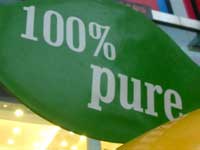 Outside the Hub shopping Mall in Goregaon, I saw a giant orange kinda thing with this leaf. I don't know qhat was 100% pure but it sure looked good enough to photograph. Now when I think about it, I am not sure why I didn't captured the entire orange kinds thingy. Since my mood is controlled by the health of my camera, currently I am in a depression. 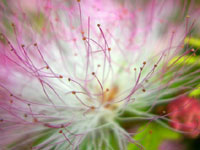 This is an old image, I took it in Powai the same day I went to Lonavla. I was looking for a different shot but I am quite happy with the way this has turned out. The way these round things on the sticks (I don't know what these are called) are in focus is strage with an auto focus camera as generally it is hard to focus on these small things. 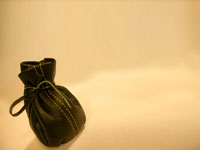 A leather pouch containing marbles used a paper-weight. After taking 10000 pics my camera is on its death-bed. It keeps acting up and will sign out very soon I think. I have to buy a new camera and with the upcoming trip to Delhi, it is not going to be possible. I still want a Lumix FZ30 but may have to settle for a compact camera for financial reasons. 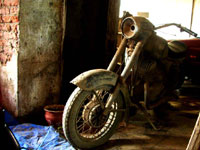 I have posted a shot of Ambassador and one of BSA, both companies wrapped up in UK long time ago. Here is another company that doesn't exist anymore. Yezdi used to make twin cylinder 2-stroke 250 cc motorcycles, earlier by the name of Java and then Yezdi and unfortunately were not able to compete with the Japanese bikes that came to India some 15 years ago. 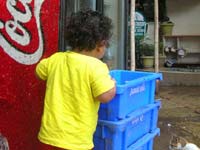 Manu seems to have made up his mind and has opted to go for Milk instead of pesticides laced cola. This is not the first time the case of pesticide in colas have come up and it is really surprising that the companies are not being fined, the plants are not being shut down and no one is taking them to court. Well that is what we say in India "Chalta hai" 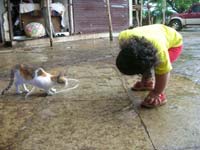 To truly understand your friends, you need to see things from their point of view and Manu seems to be doing that, literally, by getting down to his eye level. As a kitten it used to get scared of Manu who would start shouting in excitement by the sight of a cat but later he came to realise that Manu means no harm and they seem to enjoy each other's company. 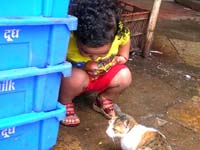 When asked about his or her best friend, an adult will think of a friend at work or may be a school buddy, I guess only a child can say that his best buddy is a cat or a dog. Manu doesn't speak enough to tell me who his best buddy is but this picture is enough to say that this cat is a damn good friend. He plays with him and chases him all over the society. 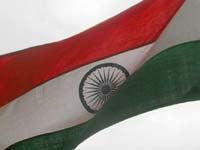 I bought my camera on 12th Feb 2005 and I have completed 10000 pics with it. The 1000th pic happened on the most opportune moment as it happened to be the picture of our national flag taken on the 60th Independence Day of India. The 9999th picture is this one. And if you are wondering once the countr goes to 9999, it resets to 0001. 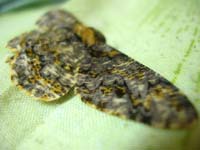 We try to keep the window of our bedroom shut till we switch off the lights to prevenet these and other insects, including mosquitoes, out but it is not possible all the time with Manu around. He like opening anc closing he woindow and sometimes bugs like these do come in. This picture is taken by Mira.

This is the last in the series of sacred fig pictures. There are a few pipal trees growing where this one is. The one in today's picture is bigger than the one I posted yesterday. In the background in Mira, watching Manu collecting pebbles.

Pipal or Sacred Fig has a tendency to grow just about anywhere especially on walls. I don't understand from where do these tree get all that they need to grow when they are growing in a crack of a wall like this one in a crack in children's play area in our society. I guess just for their survival instinct it should be declared our national tree.

I can't decide what should I call these, dry leaves or wet leaves as they are dry leaves shed by the tree and got soaked in the rain. These leaves come from pipal tree or a sacred Fig and tommorow and day after tommorow I will post more pictures of them. 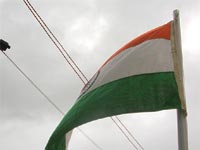 On this day in 1947 we ceased to be a part of British Empire and became a free nation. there is a lot I'd like to say but just don't feel like it. 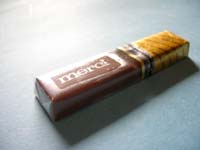 A picture of chocolate taken by Mira. Have you ever wondered that most of the things that taste good are not good for your health and what is good for health doesn't taste good. I guess some sadistic person assigned taste and nutrition to things when god was inventing them. 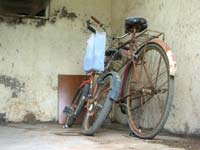 Our houses in Delhi were made with some insight of future. All the houses were given a garage for a scooter or Motorcycle. Back then and even till 20 years ago very few people actually had motor vehicles. What they had were bicycles and that is what they parked in those garages. Bicycles were as precious to them as cars are now. Back to present, look at how bicycles are treated now.

I posted a picture of Ambassador that is based on Morris Oxford. There is another company that wrapped up a long time ago in UK but still produces bicycles in India. The name of the company is BSA and it stands for Birmingham Small Arms. One of these bikes is manufactured by them. Tommorow another picture and another thought about bicycles. 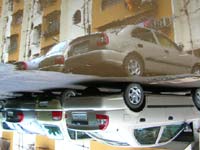 Much the same shot as yesterday. Strange how he world changes with your perception of it.

The parking of our scoeity—Greenfields. For the past three years I have been looking for shots during and after rains. We (Mira, Manu and myself) love rains and all three of us like to watch the rains from our bedroom window. Strangely enough, there is noone else on any of the other windows. May be I'll also stop watching rains if I stay in Bombay for a few more years.

Introduced in 1879 by the entrepreneur Lars Olsson Smith to take on the Stockholm's liquor marketing monopoly, “Absolut Renat Brännvin” means Totally Distillated Vodka. Considering it's price now, one would find it hard to believe that this was sold cheeper to attract buyers. One strong factor that enabled the company to sell it at a higher price is the famous and sucessful ad campaign. 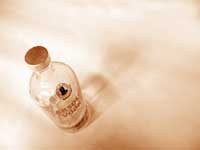 Yesterday I forgot to mention one name—Barinder Singh or "Berry". This series wouldn't have been possible without him as he is the one who gave me this bottle. I find it a little amusing that a drink famously associated with Russia is made in Sweden. Absolut probably the most famous Vodka brand is made in Ĺhus, Skĺne in southern Sweden. 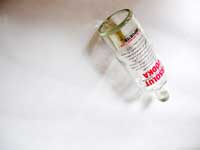 This shot is dedicated to all my friends who love alcohol. This is also the first in the series of shots of Absolut Vodka bottles. There are going to be about half a dozen of them spread over this next week celebrating the brilliant ad campaign, glorious shape and simplicity of the bottle of Absolut Vodka... not to forget the Vodka itself. 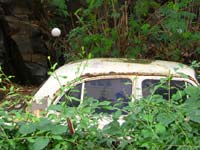 Ambassador or Amby is a car based on Morris Oxford Series III and is stil in production years after the parent company in Oxford, United Kingdom wraped up. This one though is not in running condition. It must have been parked there by the owner and since then has all sort of vegetation growing around it. Here it seems like it is playing hide and seek with other cars and has found a good place to hide.

Looks like a gas burner. Doesn't it? This is the reflection of the lamp on the table of my neighbour Mr. Aloke Dasgupta. Manu runs in to his home as soon as he gets out of the house to play. Usualy he would take a couple of pens and put those in a hole of the VCR compartment of the TV trolley or he would play with the empty packs of cigarettes.

I realised how easy it is to dismantle an office when some cubicles were ripped aprart for some expansion work in my ofice. This a bundle of data, phone and power cables used by the workstation that stood there some time ago. 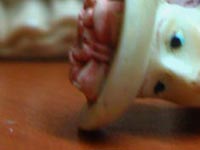 This woman had a tragic life. The early years were good when she was admired on the shelf of our living room. Later she was pushed back when things to replace her were added to the shelf and finally she got in the hand of Manu who tossed her around before ending all her miseries. May she rest in peace. 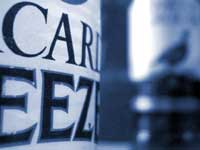 I thought I was done with the shots of alcohol bottles but I was wrong. I did some post precessing on the image of a bottle I posted on Flicker and I quite liked the result so I decided to do something similar to another image and post it here. What do you think? You can see the other images here one two and three 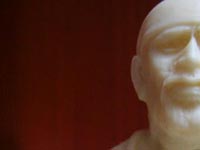 Another shot of Sai Baba of Shirdi. A few days ago I saw a photograph that was supposedly of Sai Baba. A friend of mine told me that few years ago a man in Rajasthan was selling pictures of Hanuman whom he supposedly met in a cave. With internet it is much easier and faster to spread all sort of rumors and hoaxes.