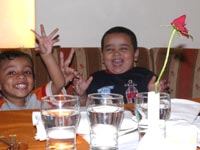 We make friends and they move out of Bombay. First my friend Nitesh moved to Calcutta and eventually to Delhi, then some friends from office moved to different places and now Manu's best friend Ritam is relocating to Singapore. Manu and Ritam are quite close and because of them Mira and I have become good friends of Ritam's parents Pradip and Debjani. This was the night before they went to Bengal from where they will eventually fly to Singapore later today. 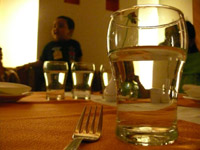 An update after a very long time. Well I had been busy with moving to a new house and after that when I set up my computer, it refused to start up. Not to mention the "48" hours Tata Indicom Broadband required to transfer the account to the new house. It is about a week now and they have not even bothered to update me on what is happening. I guess I need to find a new ISP. 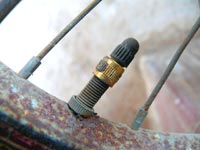 Till a few years ago air in bicycle tyres was filled with pumps operated manually. Those pumps were available with the cycle repair shops and were free to use. Now a lot of tyre repair shops have an attachment that can be used to fill air in bicycle tyres as well using a compressor.
“Hey can I use this to fill air in my bicycle?”
“Yes sure, it will be two bucks.”
“Oh! OK.” And thinks to himself to get the full value for his two bucks.
“I think this much of air is enough.”
“No I think it needs a little more.” and thinks about the two bucks he is paying
“OK. Suit yourself”
The tyre can't handle so much of pressure and explodes
“F#$%”
“It will be ten bucks to fix that puncture. May I”
“Please” 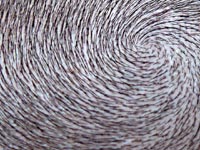 These crop circles were seen in Mumbai. My home to be more precise and it would be lot more exciting if these were made by aliens but the truth is that this is the picture of Manu's head a few days after his head was shaved for his mundans. On of Manu's friend has two such circles in his head which makes his head look too much like a coconut. 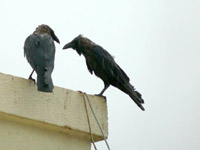 “I told you right before we left home that we should carry umbrellas with us but no, you didn't want to carry the ‘unnecessary baggage’ with you. I suggested we wear rain coats but no, you didn't want to wear that either”
“I sweat a lot in those raincoats. I get completely soaked if I wear one for 30 minutes”
“Yeah! as if you are not soaked now...” 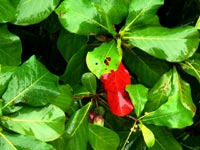 These are the leaves of almond tree that I can see from the window of my bedroom. I loved the lone red leaf. Almond tree shed leaves at around march-april and they grow at an amazing rate. This tree must have grown atleast 12 feet during the four years we have spent here.

Earlier this week I posted a couple of shots of Apple made by Manu. Well! Those shots are incomplete without this one. This is an apple drawn by Manu at school. Her teacher drew the outline and he was supposed to colour it. The star at the bottom suggests that the teacher quite liked what he has done.

I don't like to celebrate special “days” publicised by big corporates like the father's day, friendship day and so on. Companies ingrain a message in our heads that just loving someone is not enough. You have to buy that company's cards or products to prove their affection. Cadbury's has reduced a very special tradition of rakhi to a mere exchange program—a box of chocolates for rakhi. I guess they are not to be blames because we are stupid enough to either believe that our love for our dear ones can be proved by chocolates or we just do it as conformists. Afterall who wants to not gift a box of chocolates and be labeled as a rebel. 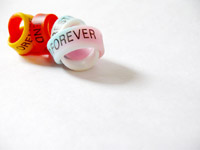 There is a story behind these bands as well that I would rather not tell here. We bought these from a mall called InOrbit in Malad, Mumbai. Ths has become Manu's favourite "jewelery" as he puts one on each wrist before going out in the evening.

Manu was quite thrilled to wear this kurta pajama or "kurtra" as he calls it. He was supposed to dress up in traditional Indian dress for his school to celebrate the Independence Day.

Manu looks quite comfortable dressed like a politician. The second image is the picture of Manu with my neighboutr Mr. Aloke Dasgupta. 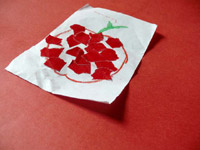 Yesterday's image was a small portion of this image. This is something very dear to me because this is the first piece of art created by Manu. In his play school, they gave him an outline of an apple and a piece of red paper that I helped him to paste to give the apple a red colur. 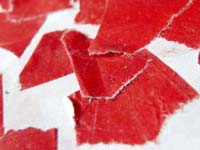 You will be seeing more pictures of this thing in the coming days. Till I post another one and tell you what exactly it is, keep guessing.

One of my colleague in Nirula's had a desk that was always piled up with all sort of stuff and when the things would start falling on the floor, she would spend a good hour cleaning it up. After seeing this cycle a few times, I suggesed her to get a table like the hump of a camel so she or anyone else won't be able to put all the junk on it. 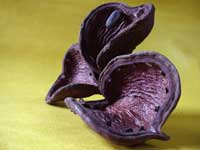 It spent a few days in the car and finally I took it home so I could take pictures of it the following weekend. When Mirs saw these, she liked them instantly. “Why didn't you carry some more”. Fortunately a day or two later there was heavy rain and a lot of these fell from the tree and some of them are now in our flower pot.

We can identify hundreds of logos, even the ones that have just a graphic and no text like the swoosh of Nike but when it comes to identifying a flower or a tree, we are stumped. We know a rose, a lotus a lily and a few other flowers and nothing beyond that. The knowledge of plants and trees is even worse. I have no clue what exactly this is. This grows on a tree in our parking and when these things containing seeds dry, they fall with strong winds or rains, probably this is how the new plants of this tree grow. I liked the shape of it and carried one with me.

Well, a lot of you must not have seen me commenting on your blogs recently. The reason is not that I have gone underground or have disappeared. I am not busier than usual either. The reason is that the new IT policy in our organization has blocked out a lot of sites and since I check out your pictures at work, I am not able to access them. I don't know exactly what the criteria are but I am not able to access a lot of blogs (including mine) while some of them seem to work...or have I spoken too soon.

We have learned to find hidden meanings in a lot of things or maybe we have the habit of reading too much between the lines. It is said that you will be going on a trip if one of your slipper is on the other as in this image. It is also said that you should not leave your slippers turned upside down for a reason I don't remember right now.

We went to a shoe sale and spotted these slippers there. I said to Mira that these are a good bargain for 50 bucks. We bought these for Manu and I guess he heard me mention that these are for 50 bucks and since them he is calling them “50 ki chappal” or “50 bucks slippers”. Now I guess if I want to brag about the price of something in front of my friend, I better not mention he correct price in front of Manu.

Hanuman asked why Sita applies a little sindoor on her head where she parts her hair. When told it is for Lord Ram's welfare, he went ahead and applied sindoor all over his body. This is why even now you see red statues of Hanuman signifying the sindoor he has put all over his body. 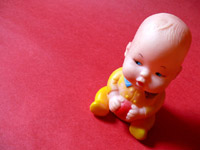 Same squeezy toy as yesterday. Earlier Manu used to call it “Chotta Baby” which means little baby. He used to treat it like we used to treat him. He'd lie down and hold this and put it on his tummy and talk to it. He also used to stand up and toss it in the air; it is a different issue he never managed to catch it after tossing it. Now he just likes to squeeze it. He kinda plays it like a musical instrument, squeezing it vigorously sometimes and sometimes using all his force to squeeze even the last bit of air in it as fast as possible to get that unique high pitch sound. I think I should buy him a small keyboard or some other musical instrument. 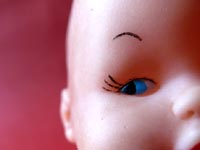 “Hmmm... This looks scaringly similar to the place described by the pink doggy. I better not move my neck or I will land up in the hospital just like him. The only thing that moves is my eyes, yessir, only the eyes, not neck, not arms...nothing else.”

“Why am I giving you my hospital bill? I am glad you asked. You remember you offered to take some pictures of me the other day. You kept asking me to pose with my neck tilted at all sort of odd angles. After those pictures were taken, I have a sprain in my neck and couldn't move it and couldn't look straight. If that was not enough you unleashed your son on me and whatever muscles on my neck were left good, he took care of them. The whole staff of the hospital was laughing at me... ”