What's in a name? That which we call a rose. By any other name would smell as sweet... or would wither as quickly.

By repeatedly showing the skyline, they have the entire world convinced that Bombay is a city like New York. While the chief minister has a vision to make Mumbai like Shanghai, there is still a very long and steep way ahead. 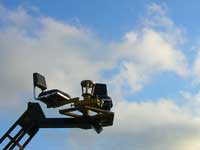 The perception is that Mumbai is the film city of India and your trip to bmbay is not complete unless you see a film shoot. In 2 years and a half, I have seen only one film shoot. With most of the produers opting to do the outdoor shoot overseas, you'd be hard pressed finding a shoot here...unless you are willing to visit a studio.

For the newxt few days I am going to post some misleading images, the kind that are usually used to give others a feel of what Mumbai is. This picture is taken in our housing society. This gives an impression that Mumbai is very green and has lot of open spaces. Only the person who has lived here knows the truth.

My camera broke down...again. The cost to repair it is coming to a quarter of the camera's cost and I also think that the guy is just trying to rip me off so I am not getting it repaired. I am not in a position to buy a new one right now as well. I am not famous/big/good enough for any camera company to sponsor my gear either. I am also not at all pleased with all this and am not in a mood to post new images...at least for some time. This means there may not be any updates in the next few days. After that I will have to raid my archines. When that exhausts, only god knows. 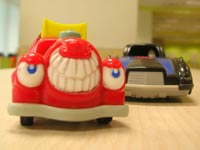 “...and wipe that stupid grin off your face before I do it for you.” This is what Mr. Incredible seems to be telling the smily car that is showing off her teeth like Ashish Nehra. Does anyone else feel that Ashish Nehra has more than just 32 teeth, say maybe around 50. 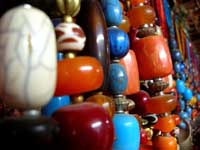 Mira and I have our different reasons to be fascinated by stone/beads jewelry like this. I like the bright colours and the attractive shapes because they make nice subject for photography. Mira likes them, she sees a lot of women wearing this kind of stuff but so far have not been able to get the courage to wear it herself. 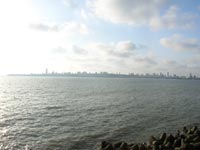 Well, a shot quite similar to the one I posted yesterday. I liked both of them and couldn't decide which one to post so posted both of them. He is waiting for his flight to Germany.

It took my almost an year, but I finally managed to gather enough courage to drive to Marine Drive. I don't know the way to town and am paranoid about driving in Bombay so it was a major achievement for me. It wasn't that bad and we managed to avoid any traffic jams. This is one of the traffic signal on the Marine Drive. 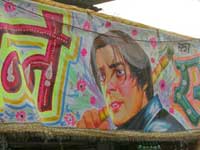 The fascination of Indians with Hindi movies can be seen in shops of fruit juices. The signs show the favorite actors of the vendor more prominently than the product itself. This shop sells sugarcane juice and the most prominent ting here is Salman Khan, a famous Bollywood actor. He is now on bail but faces 5 years in prison for killing Black bucks. 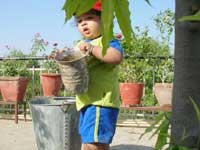 One day I went to the second floor of my Delhi house with Manu where my brother lives and came down in a few minutes. Manu started crying and just won't stop and kept saying Mumm..mummm (water). After a few minutes I realised what he wanted and took him to the terrace so he could water the plants. Back in Delhi, this used to be an integral part of his schedule. 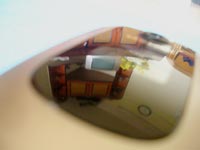 This is another of those shots that happen by accident. While trying to take some pictures of my phone, I saw the reflection of my living room in it. The pictures of the phone didn't turn out to be too good but I am resonably happy with this one. Do let me know what you think. 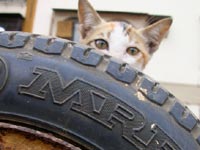 This is one of the kitten in our society and for the past few days, much to Manu's amusement, it is seen around our building. A few nights ago Manu sat down with it on the ground and finally gathered the courage to touch it. For those who don't know “Tyres with muscle” is the tag line of MRF tyres. You can even see part of the muscleman on the left of the tyre.

Mira has a theory that people who eat fast are short-tempered and peple who eat too slowly are eccentric. I eat too fast. To slow myself down, I eat a little, then take pictures of my food and then eat again. In Hindi this fruit is called “Lukat”. Do let me know what it is called in English if you know.

Ever since the society has put small pebblesover the concrete, we have allowed Manu to explore this area that has a swing, a slide and a seesaw. It's amazing how intuitive the kids are, he had no problem in figuring what the handle bar is for, on this ride as well as on my motor cycle. First time on the motor cycle, he even knew he had to leave the throttle and the clutch for me. 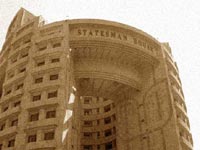 Just outside the Metro station of Barakhamba Road is this building called Statesman House. I quite liked this building and no mater what I did, I couldn't get a shot that I was really happy with so that is why you see the sepia tint and the noise. 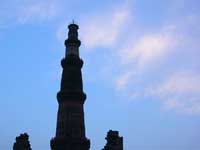 Another shot of Qutb Minar taken on the same as this but a little later in the evening.

It feels nice when you post a comment when you like a picture and I equally appreciate commenst that say whay you don't like an image andand more importantly why. That fedback from you helps in improving my pictures. Keep it coming. 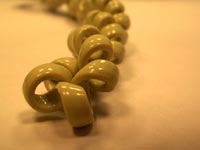 I use the cable of a really old phone as my key chain. I never had any problem of it getting tangled up in all these curls but the cables of newer phones are a nightmare. The way they get entangled is not funny. More often than not, when I pick up the reciever, the entire phone comes along with it. Try this image with the black theme. Thanks a lot for all the comments lately. Much appreciated :) 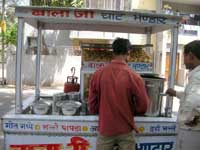 Well, the Miumbaikars may feel that life in Delhi is slow but the goal gappe (pani puri), bhalla-papdi, tikki and chaat served there are out of this world and something you can't find in Bombay. Every afternoon at about 12.30 pm, this guy would come and stand in front of my house (the house at the top right edge) in Delhi. 3.30pm was for the kulfi guy. 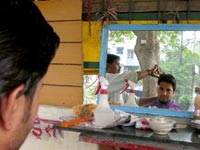 Getting a hair cut in the morning breeze is something most of us have not enjoyed. Like many other businesses in India, hair saloons are also run in the open air, next to the road. This is on the boundry of the same park where Manu was checking out the stumps. UMT or “Under Mango Tree” is what we used to call these as kids when it was unthinkable to get a haircut from them but now, with nothing much to lose, I'd be open to experience it once. 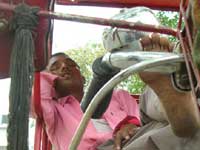 One reason people Mumbaikars tell me for not liking any other city is the pace of life. “Live is very slow there.” Looking at this rickshaw puller in front of my house in Delhi, one has to agree with them. I have seen taxi and rickshaw drivers and other people sleeping on the road in front of my house in Bombay but none as relaxed and peacefull as this. You tell me, is there anything wrong in being relaxed? 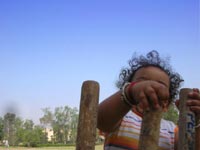 “Hmmm... Let's see. I've got hair like Andrew Symonds and height of Sachin Tendulkar, what more do I need to be cricket star?” Manu checking out the stumps of the kids who are busy looking for their ball after it was hit for a six. On another note, thanks a lot for your continuing supports and the feedback and comments about the images. Do keep them coming.