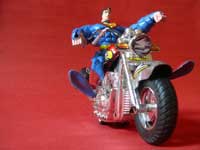 par handle haath na aaya. This is the scene a few months after Superman had the following conversation with Governor Arnold Schwarzenegger.

Arnold Schwarzenegger: You know what the problem with you is, you don't look strong enough.
Superman: I am stronger than anyone, I can do benchpress lifting not just weights but the entire gym with it.
AS: Yes you are strong, but you don't look strong. The most important thing is perception. You have to look strong as well.
SM: So you are saying it is more important to look strong then be strong?
AS: Exactly! Look at me, it was the image I created than got me the office of governor while you are still flying around, doing odd jobs. To be truly respected as a superhero, to stand apart in the crowd of other super heroes like Batman, Spiderman you need to look stronger than anyone else.
SM: So what do you suggest?
AS: Come with me, I can show you how you can have a nice body.

Now as you can see, Superman had been pumping iron a little too much. So much that his chest has become so big that he can't even get his hands to grab the handle of the motorcycle and this thighs are so muscular that he can't reach the breaks and the gears. 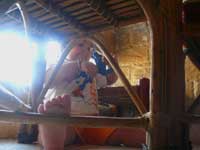 Manu fixed a place where he would go and sit if he was angry with Mira. It is the place in front of our living room window. Now he seems to like that place and would go there just to play. I guess he likes that place because it gives him a sense of control because he can cut himself from the rest of the house off using the sofa and the chair. The thingy seen below his left arm is "peedhi" or a small stool kind of thing made of a wooden frame and jute rope. Here he is playing with Superman or "Uncle" as he calls it. There is a funny story about that Superman and Arnold Schwarzenegger that I will tell you tommorow. 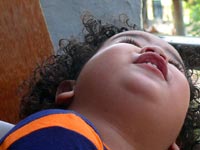 Manu realised the advantages of having a balcony quite quickly. He could sit there and enjoy the rain, watch the cows and dogs and also have a conversation with his Tauji who live on the floor above. 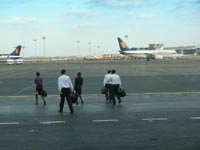 The crew seems confused about which plane they have to go to. I read in the newspaper a few days ago that Capt. Gopinath of Air Deccan is defending its open seating arrangement but I personally hate it. In past I have mentioned how I find it a little odd that people start queuing up long before the boarding starts. This time we had to do the same so that we could all sit together. In such a scenarios the seats that are occupied first are the window seats and then the aisle seats, leaving the one in the middle empty. The last time I remember I had to request some one to swap seat with me so I could sit next to Mira. Well Mr. Gopinath, you may think it is fine but I personally feel it is a major inconvenience; maybe you should also take a lesson from other airlines that give the flyers a choice of seat right when they are booking the ticket on the net. 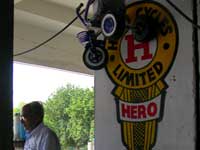 When I retire I think I would like to settle down in a place like Nangal. It is quite, very green and has no pollution. The life is very relaxed too. I am thinking once I do that I will trade my car for a bicycle, as I will very few places to go to and all the time in the world to get there. That place may seem like primitive to the people used to living in a place like Bombay as it has no multiplex, no shopping malls, no traffic jams either but I quite like it when I can spend a few days in a places where I am not rushed by anything or anyone. 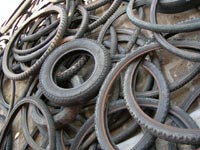 There are some things that you can't explain and my reaction to a tyre burst is the same. Usually when the tyre has a puncture, the air pressure reduces gradually till it is flat but sometime the tyre of a moving vehicle just explodes and that explosion has a very unique sound. It is not a bang but more like a short whistle mixed with a metallic clang. Whenever I hear that sound, I don't know why, but I can't control a fit of laughter. With the JV Link Road just outside my home, I get to hear such sounds quite often too. 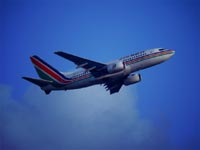 I am back from my trip to Delhi and Punjab. It was really hectic and we spent three nights in the trains in the past one week and it has taken its toll on all of us, especially Manu. Manu didn't sleep well during our journey from Delhi to Nangal and back and the night before last had been the worst for him. He played in the train for a while and then started vomiting. He didn't sleep the entire night and now he has a bad cough. I guess this is the last time I have taken him to such a long train journey. 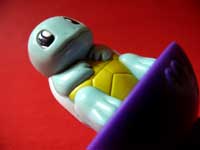 Two years ago I went to McDonalds. My nephew had a Happy Meal and he got this toy which he gave Manu. I knew it was some pokemon thingy from that stupid TV show where the only character I could recognise was Pikachu because of his soft toys. Today I know it is Squirtle - a water pokemon and I can identify a lot of pokemon from the show. One day I surprised myself when I came home to see this show on TV and asked Mira "Where is Misty?" How do I know al this now? Fatherhood taught me. 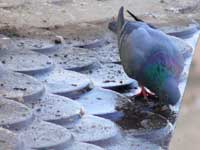 The air conditioners are doing more than just cooling the homes. They are providing water for the birds too. This pigeon is drinking the condensed water vapors droppings from the aircon above him. I saw him sitting just under the aircon with its beak open trying to catch the drops of the water but by the time I got my camera the pigeon had moved to the window shade below to drink the accumulated water from there. 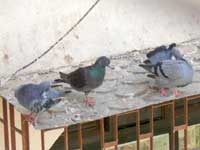 “Hey Mike! This is one hell of a tan, did you fly south for holidays?”
“No man, this is not by sun. Have you not heard about the new spa called Helios that opened in the neighbourhood. I got this tan there. It is brilliant, no fear of sunburns and perfectly even tan.”
“Yeah, it makes you look so damn cool, look at our feathers James, we need to go there as well.” 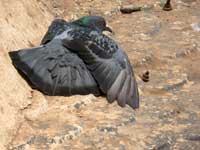 This is turning out to be bird week. I have posted a few picturs of birds and I have a few more to go. By the look of it, this pigeon is emjoying the sun but I am not sure if that is what it is doing actually in this heat. 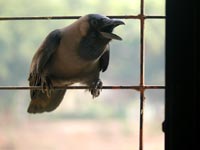 “You didn't ask for my permission before posting a picture of mine on the net. Even worse, you wrote something completely unflattering to go with it. Now people are thinking of me as a lazy bugger who can't even find his own food. All I take from you is a biscuit for the morning tea and you are making it such a big deal as if you are taking care of all my meals. This is not over, you will hear from my lawyers.” 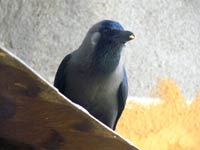 This is a crow that has been coming to our house for biscuits ever since we moved here. He is quite choosy and only likes Good day cashew biscuits. If offered any other biscuit, he would just ignore it as he can't just see it or would take it from our hand and throw it down. For the past few days he/she is taking care of eggs and is making too many biscuit requests. I used to think of him as my pet crow but then I thought about who is on which side of the cage. 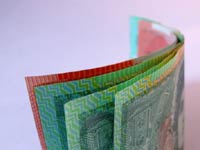 Money does makes the world go round and I realised it when I showed this image to Manu. I asked him what it is and said "Paise" (money). He identified these notes even when there are not at all like Indian currency and there are not any numbers visible that could have given him the idea. I guess kids now realise at a very young age what is important. 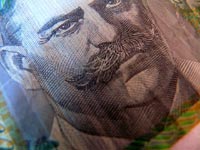 Amitabh Bachchan said in Sharabi that if one should have a moustache, it should be like the moustache of Nathu Lala, a character played by Mukri in that film. I am sure if he had seen this man, his moustache would have equally impressed Amitabh Bachchan. 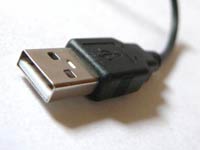 Thanks for the comments and the encouragement regarding the Photobloggies 2007. This is a card reader for downloading the images as I don't plug the camera directly to the comp ever since the camera salesman told me that the camera can be damage with a voltage surger. With a surge protector, I don't really know how real the threat is but I am not willing to take a chance. 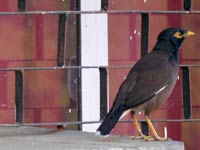 It is strange. When the finalist of the 2007 Photobloggies were announced, I was pleasently surprised because I was not really expecting to make it but today, when the results are announced, I am feeling a little disappointed because I am not the winner of the category I was nominated in.

Many congrats to the all the winners. Please visit the photobloggies site and check out the winners, there are some very good sites there. 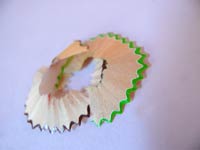 Manu started using colour pencils only a few days ago and is not aware of the concept of sharpening the and it is better that way. The day he finds out what a sharpner is and what it does, the length of the pencils will reduce to an inch when he can't sharpen it anymore. One day I sharpned his pencils for taking this shot while he was sleeping. When he woke up, he saw some pencil shavings behind a chair and said "Look papa, an insect" and when I looked at it, it indeed looked like a moth.